The 118th birth anniversary of JRD Tata was celebrated on Friday, July 29, 2022 at the Jamshed Bhabha Theatre, NCPA, Mumbai, as part of the JRDQV 2022 function. Mr. Ratan N Tata, Chairman Emeritus, Tata Sons, and Mr. N Chandrasekaran, Chairman, Tata Sons, graced the function with their presence. The function was attended by 450 Tata employees at NCPA which included more than 100 senior Tata leaders in attendance. Around 1300+ Tata colleagues over the globe witnessed the function virtually through the Tata Communications webcasting medium.

Mahafrid Billimoria from Indian Hotels was the Master of the Ceremony.

The function began with the traditional lighting of the divo by the Group Chairman, Mr. Chandrasekaran. This was followed by a film screening which outlined the progress made on Business Excellence at Tata over the last 25 years.

Mr. S Padmanabhan, Chairman - Governing Council, Tata Business Excellence Group, provided a brief update on the progress made by Tata companies in the areas of excellence in the past and current year.

“Our pursuit for excellence continues, focusing on achieving new heights across the group, with a focus on value creation in our endeavour and a deep-rooted sense of giving back to society. Excellence has always been one of our group's core cherished values. Today, we celebrate this very spirit of excellence, which is enabling our group companies towards the achievement of world-class performance.”

He continued, “The purpose and endeavour of the Tata Business Excellence Group has always been to partner and support the group companies in their quest to become world class in their respective industries. This partnership has been institutionalised through a virtuous cycle of performance excellence that has evolved over the years.”

In the past year, five companies participated in the data excellence assessment. These assessments were completed by 41 assessors from 21 companies, supported by nine subject matter experts. 17% of the assessors were women.

Mr Padmanabhan added “The business excellence journey over the last three decades has been extremely enriching. The Group provides thought leadership on performance excellence and contributes to the business excellence movement. The Baldridge organisation has been seeking inputs on process and criteria changes from Tata and we have been contributing effectively to this process. The Baldridge organisation recognises the TBEM process as a role model. As a recognition of this and our contribution, the Baldridge Foundation has now accorded Tata Sons as a founding member of the Mac Baldridge Society and lifetime trustee of the Baldridge Foundation Institute for Performance Excellence. The Mac Baldridge Society is limited to 20 elite members. Tata Sons Private Limited is the first international company to be recognised as a Founding Member.”

Group Chairman, Mr. Chandrasekaran, made an insightful presentation detailing the growth, performance, and prospects of Tata companies. His presentation was set against the backdrop of several geopolitical events that have had a great impact on world economics. Some of these include the pandemic, geopolitical crisis, high inflation, the rise of big tech and cryptocurrency. 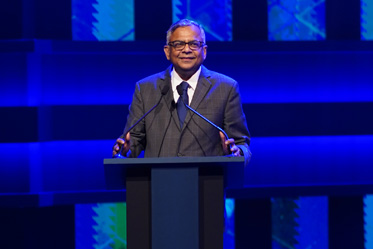 He also mentioned an impactful quote by JRD Tata, “I suggest that the most significant contribution organised industry can make is by identifying itself with the life and the problems of the people of the community to which it belongs, and by applying its resources, skills and talents to the extent that they can reasonably spare them, to serve and help them.”

He concluded by saying that the organisation is preparing for the future by leveraging technology and driving large-scale community impact across the country.

The evening concluded with a fitting tribute to JRD Tata with a magical musical journey, in the enthralling ambience of NCPA, founded by JRD Tata and Dr. Jamshed Bhabha, two visionaries who saw India’s need for an all-encompassing world-class performing arts centre.

Ms Billimoria concluded the evening on a poignant note, “I do believe JRD Tata watches over and silently guides us even today and more so, since the Maharaja is back. Let us keep his legendary spirit alive as he continues to fondly remain in all our hearts and minds.”